The 2022 US Memory Championship

I qualified comfortably. The finals were scheduled for October in the Orlando area. After five events, one of the twelve finalists would be crowned national champion. I slept well, but I was nervous on the day of the event. There was tension in my chest. My palms sweated when I was holding the microphone. Each year I feel more pressure since I keep improving and expect more from myself.

The first event was Pinball Recall, a Lumosity game (described here in last year's post). It would determine seeding. The finalist with the highest score got to pick their seat. In the next events, the person in the first seat got asked the first question, the person in the second seat got asked the second question, etc. Being in the last seat is a slight advantage. There is a chance that someone will get eliminated before you get questioned again. However, I did not consider this to be very important, so I neglected it. My preparation consisted of playing the game once on the morning of the championship. I beat my high score, so I figured I was in good shape. Then I finished in last place. Not a good start. I was in the 4th seat.

Event #2: Words. We had 15 minutes to memorize a list of 200 words. Two mistakes and you are eliminated. The round would continue until three of the twelve finalists were knocked out. My plan was to memorize 120 words. It's important to be calm when memorizing and I wasn't calm. Plus, some of the words were tough, so I decided to do just 100. I didn't need to know all 200; I just had to know more than the three weakest competitors. The finalist in the first seat had to recite the first word. Then the finalist in the second seat had to say the second word, etc. But if someone made a mistake, the next person had to correct them. E.g. if the tenth finalist screws up the 10th word, now the 11th finalist has to say the 10th word, then the 12th finalist has to say the 11th word, and so on. So you can't just memorize words 1, 13, 25, etc. I did all of the first 100. I was sailing through until around the 60th word. I had visualized "riptide - image" on a table in Ophelia Parish hall and then there was "autonomy - house" on a couch. Then when we were recalling the words on stage, I skipped the table and went straight to the couch. I almost never do this. The pressure got to me. Strike one for Matt. If I did that again, I would be knocked out.

Soon it was my turn again. The previous word was "omen" but I was drawing a blank on what came next. My time was ticking; we only have 15 seconds to answer. Was I going to finish in last place?! Then I saw a "k" in my mind's eye. "Knelt," I said. I dodged elimination. For the rest of the round, everything was under control and I advanced to the third event.

Event #3: Long Term Recall. On September 1, we were given a 12-page spreadsheet with trivia about WWE wrestlers, Fortune 99 companies, and space shuttles. I remember hating this event last year since it was so much work. But I had forgotten just how hard it was. I was spending about 2 hours a day memorizing and reviewing the information. Usually that meant working late into the night. It took so much time and energy away from training for the other events. But even after all that toil, I wasn't ready for the finals on October 1. Then Hurricane Ian forced the organizers to postpone the championship. I needed the extra three weeks, but I was still a bit shaky with the space shuttles. There were many repeated dates - more than one shuttle launched on a February 3 - but in different years, so it was easy to mix them up. There were discrepancies with the astronauts' names. E.g. in one part of the spreadsheet, there is a Frederick D Gregory but in another part, his name is Frederick G Gregory. Easy to confuse. I had no problems with the first two questions, which were about wrestlers and the Fortune 99 list. Then we got to the dreaded space shuttles. I found a new way to mess up: I was asked about mission STS-87. My mind jumped to a shuttle that launched on 8/7. Midway through, I realized that I was doing something wrong. But we only have 15 seconds to answer, and I didn't have time to fix it. Once again, I was on the cusp of elimination. But I wasn't the only one struggling with the shuttles. Three more finalists were knocked out and the round ended before I could be questioned again. Another event where I had made a dumb mistake and gotten away with it.

Event #4: The Tea Party. I was one of the six remaining finalists. We would watch five videos where a "tea party guest" told us their name, birthday, occupation, and much more. I knew this event would be extremely hard. I had written a computer program to generate scripts and then read them aloud. I can't memorize as fast as they can talk, even if they are speaking at a normal speed. My strategy was to skip some parts and focus on getting the rest correct. Everyone else would also be struggling, so maybe I could outlast them. I knew I didn't have to be perfect; I only had to be better than the bottom three finalists. By now, the ones in the first three seats had been eliminated, so I had moved up to the first chair. The first question was always about names, so I was extra careful when memorizing each guest's name. I skipped the next two pieces of information (birthday and hometown), since the other five finalists would probably be asked about those. But like the words event, if a finalist misses a question, the next finalist has to correct them. Former champ John Graham was in the second seat and recited the birthday correctly. But the third finalist forgot the hometown. The fourth finalist had to correct them, but they didn't know the hometown either. Then the fifth finalist also screwed up the hometown. And the sixth finalist. Now it was my turn again. I confessed that I had skipped the hometowns. Strike one for Matt. But four others also had a strike, so I still had chances. This event was like baseball: three strikes and you're out.

As expected, the rest of the field continued to struggle. It was my turn again, and I was asked about the guest's occupation. Job title, employer, and date that they started working. I knew it all. A few other finalists kept racking up strikes. Then I was asked about the guest's favorite sports team. I didn't completely skip that part, but I hadn't given it much attention. I knew one of them liked the Carolina Panthers, but I wasn't sure if that was a different guest. I tried it anyways and got it wrong. Strike two. But I only had to outlast the three weakest finalists. Two were eliminated. Then it was my turn again and I had to remember the guest's three favorite foods. This was another part that got minimal attention. I hoped the answer would spring to mind within the 15 seconds that we have to answer. I saw pineapple pizza, but that might have been for a different guest and there's no partial credit if you only get one of the three favorite foods. I was out. Fourth place - my best ever.

I'm honestly not sure I will compete in the US Championship again. I think I have the potential to do better than 4th place, but the Long Term Recall event was so much torture. I pushed myself through those long nights of review by swearing that I will never do it again. Maybe if Long Term Recall were shorter, I would be willing. But I'm not retiring from memory competitions. Instead, I want to focus on tournaments that are internationally ranked. It will likely involve travelling to Europe or Asia, since those events are rare in America. Hopefully I can do that over the summer.

Posted by Matthew S. Wilson at 5:53 PM No comments:

In spite of Nakamura's absence, the field is still very strong. 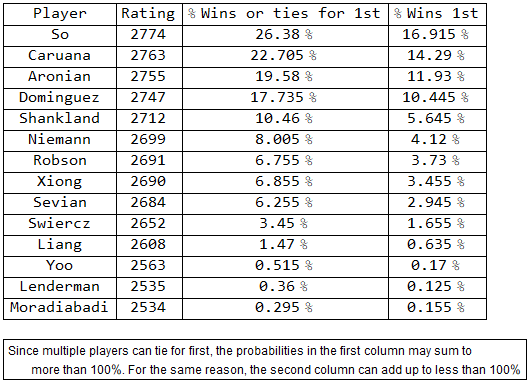 Posted by Matthew S. Wilson at 1:37 PM No comments:

Magnus is the favorite, but don't be shocked if someone else takes first - the field is extremely strong. 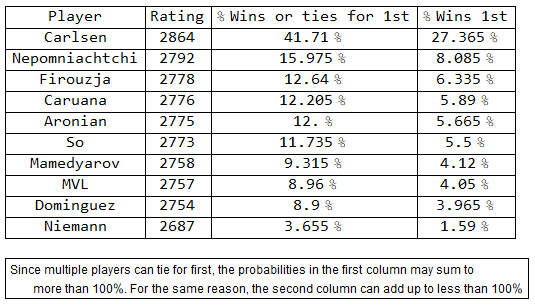 Posted by Matthew S. Wilson at 1:27 PM No comments:

Ratings and the Olympiad

With a few exceptions, their ratings fell. However, it was especially bad for Team USA. "2700s tend to be overrated" doesn't fully explain their performance. Some other factor must be at work.

Posted by Matthew S. Wilson at 8:48 AM No comments:

The winner will face Magnus Carlsen in the World Championship 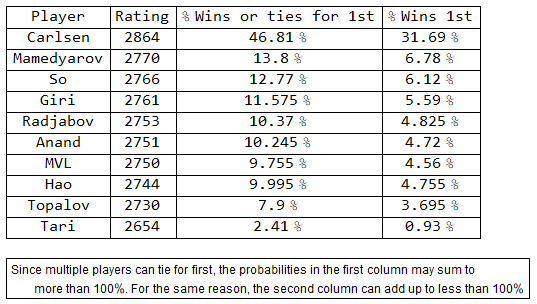 Posted by Matthew S. Wilson at 9:38 AM No comments:

Anand returns to classical chess! Though many players are skipping the tournament in order to focus on the Candidates, the field is still very strong. 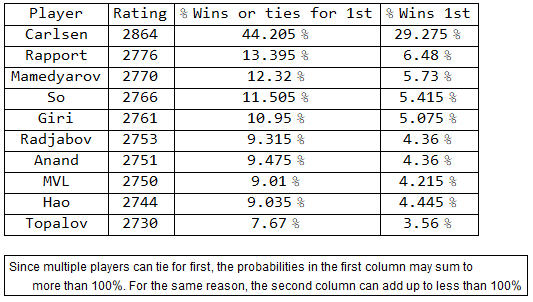 Matthew S. Wilson
I am 2100 player and an Economics professor at the University of Richmond. Link to the methodology section